Boluda attends for the sixth consecutive year with its own stand, number 63, Hall 8

For the sixth consecutive year Boluda Corporación Marítima is attending the Intermodal South America international exhibition, one of the most important logistics forums in the international arena, held in Sao Paulo, Brazil this year from 19 to 21 March. During the 25th annual event the holding company will be showcasing their new global maritime services in Latin America to visitors and clients at stand 63, hall 8.

The corporation is currently one of the leading companies in maritime sector, operating in Spain, Portugal, France, Italy, Germany, Cape Verde, West Africa Latin America and the Indian Ocean, and offices in five continents. With more than 180 years’ experience in the maritime sector, the holding company’s main focus over the last 40 years has been to internationalize and diversify its maritime services worldwide.

At the Sao Paulo logistics forum Boluda Corporación Marítima shipping company Boluda Lines will showcase again new services on its 15 maritime freight shipping lines between the Iberian Peninsula and the Canary Islands, with connections from there to the Western coast of Africa, northern Europe, the Mediterranean and Cape Verde.

Boluda Lines has also improved its Northern service, directly connecting the ports of Bilbao, Leixoes and Lisbon on the route with the Canary Islands. With this new change the shipping company has reduced transit time from Portugal to Cape Verde to less than a week, offering the fastest and most regular service available with this archipelago.

It will also show clients improvements in dry and refrigerated cargo transport on the Paraguay-Paraná Waterway, offered in light of increasing demand for the service already established and provided since 2005 by its subsidiary Naviera del Mercosur, SA.

This waterway, one of the most important river routes in the world and the key to movement of goods from the southern cone, has a new container ship, the VICKY B, sister ship to ASUNCION B, which has facilitated the increase from biweekly to a weekly service between Montevideo (Uruguay) and Buenos Aires (Argentina), and Asunción (Paraguay), and vice versa. Its special draft characteristics, dimensions and manoeuvrability make it the safest and most versatile vessel on the waterway.

Boluda Lines has 47 offices worldwide, also providing international freight forwarding services via Boluda Cargo Int’l, which has a global reach in sea, land and air transport, offering a comprehensive selection of logistics solutions. Boluda Lines completes its logistics portfolio with Boluda Maritime Terminals, which operates six of its own terminals, having added Tenerife and Santa Cruz de La Palma, strategically located on the Iberian Peninsula and the Canary Islands, and Boluda Trucks, which boasts 50 Volvo trucks.

Boluda Corporación Marítima is also the second leading company worldwide in towing services, through Boluda Towage and Salvage, the core business division of the holding group, providing essential services for facilitating traffic flow in the port facilities and security in the maritime sector. It has a fleet of around 250 tugs distributed among the main ports of Latin America, the Caribbean, Spain, France, Germany, the west coast of Africa and the Indian Ocean.

Fuel supply in Panama, and Trinidad and Tobago

Transport safety and respect for the environment are two fundamental pillars of Boluda Tankers, a strategic transportation and fuel supply service that is sector leader in Spain, with 15 vessels and an annual fuel supply capacity of over 12 million tons. Boluda Tankers has served the Atlantic and Pacific coasts since 1998, operating in the Panamanian ports of Balboa and Cristóbal, and Trinidad and Tobago since 2017. 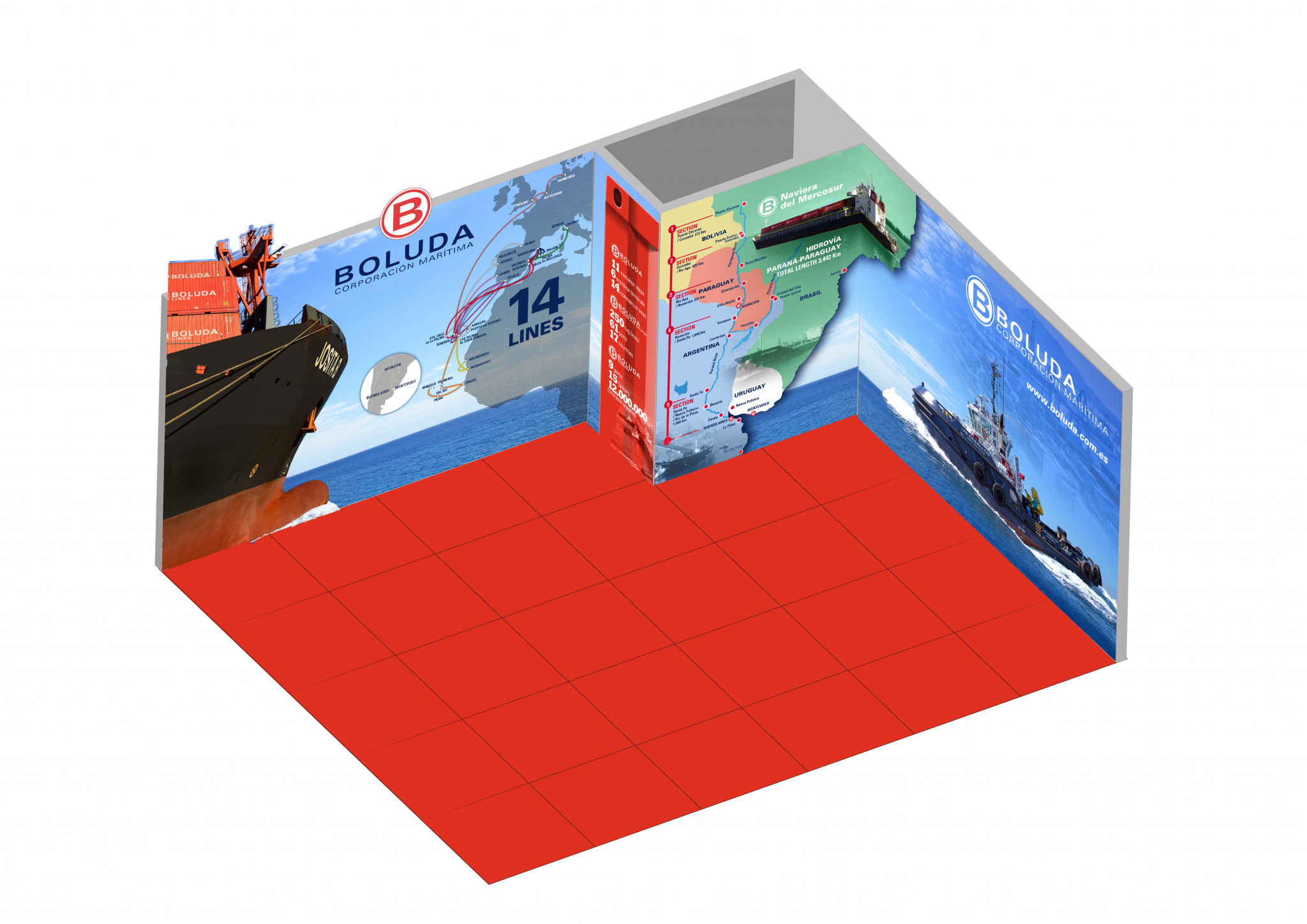 Model simulation of the Boluda Corporación Marítima stand to be used in the Intermodal Sao Paulo Exhibition.