Valencia – The headquarters in Valencia of tugboats of Boluda Towage and Salvage has welcomed this morning the staff of the fire station of  El Maritimo of Valencia with the purpose to let it know the installations and the aptitude of the tugboat fleet in one of his main task, the fight against fires and marine pollution.

The visitors were embarked on board of a tugboat and were able to see the demonstrations of water launch and the built of protection screen by the personnel of the base of Remolcadores Boluda. Also, it had been given to the responsible of the staff of the firemen of Valencia the technical information necessary about the capacity of the bombs, systems against fires, Bombs of bale out, connectors, etc. as well as measures of security and practical knowledge to keep in mind in the moment of getting on a boat to face a situation of emergency, like dangerous material that used to be on the boats and aren’t reflected on the maps

The plan of Autoprotection of the Port of Valenca programmes this visits to guarantee the coordination of the entities which take part of this eventuality : Firemen park, Control center of Emergency of APV and Remolcadores Boluda.

The personnel of fire station of Maritimo, which is considered team of first intervention, has to work together with the personnel of Remolcadores Boluda, highly specialised in this kind of situations of emergency who had taken part on board of boats docked and dragged on port waters.

Once this programme of visites is finished ( a total of five) it has been accorded to realice a program of combined exercices between the two parts. 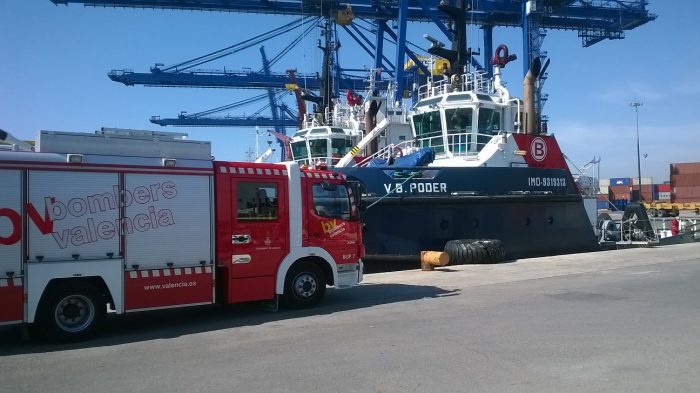