It was part of the sponsors of the First Half Marathon of Solidarity for Cáritas.

Boluda Lines, division of navigation of Boluda Corporación Marítima, has collaborated in the celebration of the First Half Marathon of Solidarity for Caritas of Vilagarcia de Arousa, which took part in the port area of the Galician city.

Organized by the Association of the traders of Zona Aberta,  this sporting event will assign the funds taken to support the humanitarian institution which in Vilagarcia de Arousa give a great social work, helping daily nearly 70 persons during the lunch, even though recently, peak of assistance were produced, by the attendance of new guest with no fixed abode, and who could not access to social and sanitarian services for not being registered.

Boluda lines keeps in Vilagarcia de Arousa, a weekly stopover, being the complete itinerary Bilbao, Vilagarcia, Lisbon, Tenerife, Las Palmas, Arrecife, Fuerteventura, Bilbao. The Terminal of La Luz in Las Palmas is used as a connection with the Ports of Agadir (Morroco), Nouadhibou and Nouakchott (Mauritania), Dakar (Senegal) and Mindelo (Green-Cap). For all this destinations, Boluda Lines has a huge variety of containers, for dry charges as well as for refrigerate o frozen one, admitting also road and project cargo. 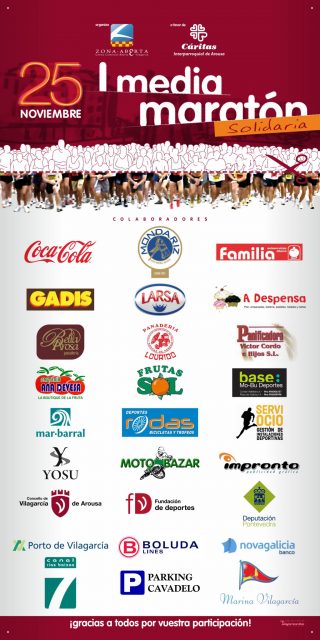