From the port tug to the enjoyment of the animals. The primates of BIOPARC will play with ropes of the Corporacion and put to the test their resistance.

The shelters of the primates of BIOPARC Valencia likes the chimpanzees and gorillas, even the enclosure of the elephants and lions, since now will get new elements of games that will ease their environmental enrichment.

It’s a serie of ropes also called estaches, used by the tugs and is a present made by the company Boluda Corporación Marítima to BIOPARC Valencia.

This kind of ropes has a highly technical use and then has a high cost. They are used for the tug port, with a big capacity of resistance and break. The material must guarantee at any time its capacity to endure the strength to tug big boats and for that when it has been used many times, they change its use. BIOPARC Valencia will re-use it converting it in a complement of the inside enclosures of the animals, in order for them to have the best conditions

Today has been conducted the transport from the base of the tugs of Boluda Corporación Marítima in the port of Valencia to BIOPARC Valencia of ropes if a weight of about 1.365 kg, nearly 1 ton and a half. The technical name is “Strongline Rope”. They have 80 m/m of diameter and 100 meters of length, and have a weight of 455 kgs each. This morning it has been charged 3 pallets, 3 reels of 100m.

The animals of Bioparc Valencia enjoy of excellent outdoor spaces that recreate their origin habitat, and take refuge in the inside enclosures from the moment of the close to the opening at 10 o clock in the morning. During those hours they receive all the attentions from their zookeepers, take the most important meals, that are the diner and the breakfast and besides they have element of play.

Theses estaches will be placed in a strategic way in the shelters of the primates, elephants and lions of the Bioparc for them to climb and train. 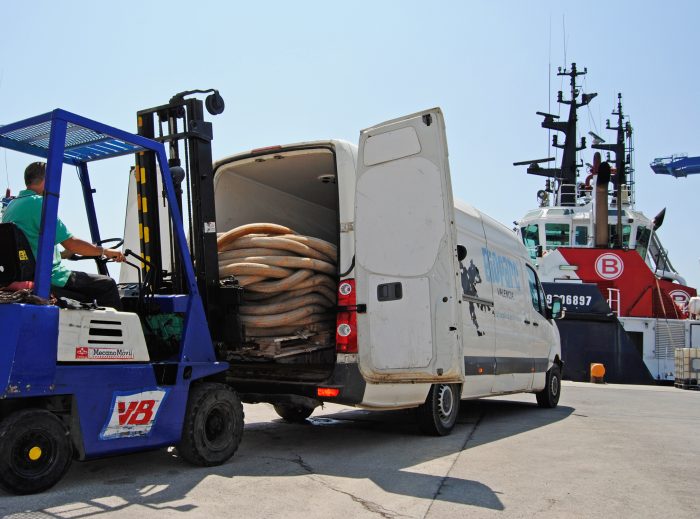