The terminal, property of Boluda Corporación Marítima, has received today the first ship of the Belgian shipping company.

The line who covers the ports of Rotterdam, Lexois, Las Palmas, Ivory Coast, Cameroun, Congo, Zaire, Angola, Namibia and Equatorial Guinea will improve the connectivity between the port of Gran Canary and West Africa.

The terminal of la Luz has received this morning the first container carrier of the company Safmarine that will since today stops once a week in the Gran Canaries port since the agreement reached between Boluda Corporación Marítima, who administer the terminal of la Luz and the shipping company. The line who before was operating in the port of Tenerife, will cover the trip Rotterdam, Lexois, Las Palmas, Ivory Coast, Cameroun, Gabon, Congo, Zaire, Angola, Namibia and Equatorial Guinea, which according to Francisco Naranjo, manager of the división Boluda Terminales Marítimas and of the Terminal of la Luz “will improve the connection between the port of Las Palmas de Gran Canaria and West Africa and will reinforce the international projection of the port”.

This line is covered actually by 9 boats of 150 meters long and which characteristics of transport allow any kind of charges, containers and break bulk that’s why all the holds can house all kind of merchandises no containerized.

The capacity of the boats is of 600 teus, which according to Boluda Terminales Marítimas will suppose a number of 1.000 containers of exportation per month.

Nowaday Boluda Corporación Marítima deals with four maritime terminals, in Fuerteventura, Sevilla, Dakar y Las Palmas (La Luz). The strategic position of the port of Gran Canary and the improvements installed in la Luz since 2008, year when Boluda reached an inversion of 20 millions of Euros in the expansion of this terminal, have supposed an increase of the containers and the maritime companies who stop there and a growth of the traffic of the transfer, one of the main goal of the division in this area. 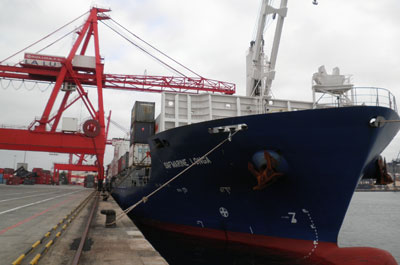