The subsidiary Boluda France now has two new tugboats, the VB LIKURAI and the VB FADO, which will enter service in East Timor, built this year by the Piriou shipyard in Vietnam.

Valencia, May 25, 2022. Boluda Towage, the towing division of Boluda Corporación Marítima, through its subsidiary Boluda France, has expanded its activity in Asia, with the forthcoming start of operations in East Timor, north of Australia. Currently, Boluda Towage has a fleet of 400 vessels in the main ports of Europe, Africa, Latin America and the Indian Ocean.

To this end, Boluda Towage has expanded its fleet of tugboats after contracting with the Piriou Vietnam shipyard, located in Nha Be, for the construction of two new vessels, named VB LIKURAI and VB FADO, which have already been delivered. The two tugs, with 3,800 and 5,100 horsepower, have a towing capacity of 45 and 60 tons at fixed point, respectively; they have a standard PIRIOU design and are tailored to Boluda France’s specific needs. They are particularly easy to handle and meet the latest safety and performance requirements, offering our customers solutions tailored to their operational needs.

Denis Monserand, CEO of Boluda France, said that “These two new tugs will be used at our first base in Asia, in East Timor, as a result of a partnership with the Bolloré Group. Thanks to this long-term project, Boluda France participates in the expansion of Boluda Corporación Marítima worldwide. We would like to thank PIRIOU for their support in this new venture.”
Vincent Faujour, president of the Piriou Group, expressed his satisfaction that Boluda France “has once again shown its confidence in us with this contract for the construction of two new OST30s. The uniqueness of this order lies in the fact that this is the first time we have supplied Boluda France with vessels to be used outside mainland France or its overseas territories”.

The vessels are the OST 30-Omni Stern Tug model from the range of tugs designed by PIRIOU. The OST 30 is a multi-purpose tug developed for push pull tug and harbor assistance operations as well as offshore operations and is equipped to assist vessels in access channels.

On the bridge, the ergonomics of the individual control station and the high visibility of the entire working area and its surroundings allow the captain to operate the tug without any assistance whatsoever. 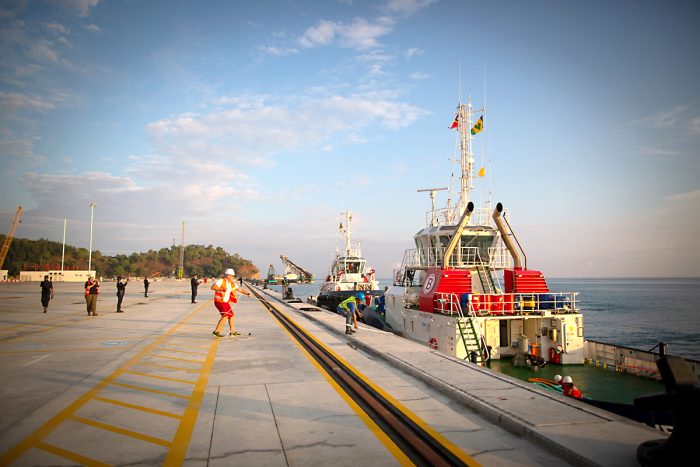