Organised by Adecco it gathered representatives of companies in reference to the Social Corporative responsability.

Valencia – Boluda Corporación Marítima has a participated in the work day “Levante Mas RSE 2014” organised by Adecco, where it has been exposed experiences of success of companies implicated with the Social Corporative Responsibility.

Boluda Corporación Marítima, signatory of the Worl Pact of the United Nations since 2011, counts with a steady staff composed by persons who develop in he company the main part of its professional career, also it’s considerable the high percentage of women who occupy management positions, despite of being a  masculine staff as they are merchand sailors in its main part.

Regarding the Social extern  responsability, Boluda materialise its own agreement with the third world with a ow supportive program, Humanitarian Transport”, through which, in collaboration with ONG’s and supportive entities, transport for free on board of its boats material of first aid to countries in way of development and with humanitarian crisis.

Also it was underline during the work day the Project Aportem-Puerto Solidario Valencia- of which Boluda is founder member. Aportem works with the potential of the 19 companies who take part of it to promote the RSE in the portuary area.

In addition of Boluda, in the work day, it could be listened the experiences of success of important companies like Dr Frank Schneider, Gas Natural, Profiltek. Besides, the foundation Adecco has brought a goblal vision of the more innovative strategies in matter of diversity and work integration.

During the closing of the act Pablo Pineda first person with Down Syndrome with a degree has made an intervention. At the meeting have came the representatives of the most important companies of the Comunidad Valenciana. 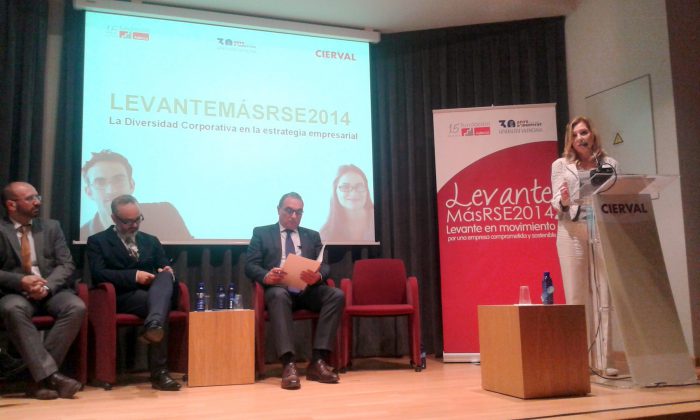