The choir and the Philarmonic Orchestra of Gran Canaria take for the third time consecutively in the same stage.

Las Palmas de Gran Canaria – In the magnificent place of the containers terminal of La Luz, will take place the next 12th of July, with the sponrosing of Boluda Corporación Marítima, the concert “the Opera Experience”, who take place for the third year consecutively  in the same space.

This is a unique ocasion to open and let to know the port area to the citizens. The exceptional stage will be formed by 80 containers_160 teu’s_ that will occupy 40 000 m2 of port area and 180 metres of mooring line, the ensemble will be surrounded by the impressive cranes of 93 meteres high and nearly 9000 tons of weight of the terminal and the sound power will be of 396000 watts.

The assembly will took shape in a record time thanks to the skills of the employees of the Terminal of La luz who perform perfectely the stage designed by the local arquitect Juan Espino. Beside the amazing construction, the containers terminal keeps given the usual service to the boats.

Organised by the Town Hall of Las Palmas and directed by Pedro Halfffter, the choir and Orchestra of The philharmonic of Gran Canaria will play Soundtracks of historical movies as Captain Blood, Starwars, Alexander Nevski. 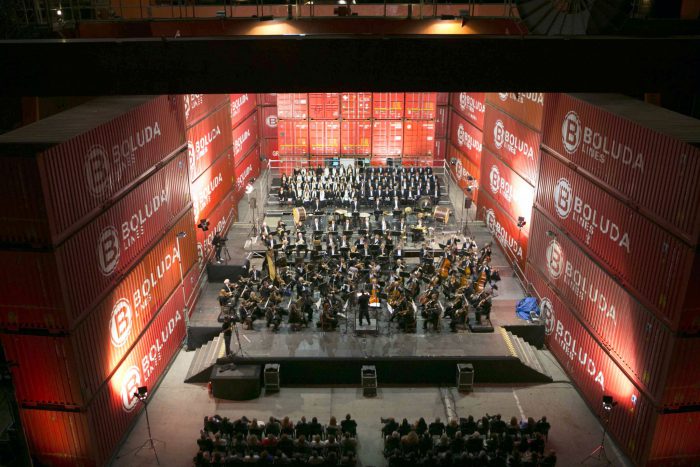