The VB Jalisco and the CMM Mariachi will give services in Ensenada, Baja California and Coatzacoalcos, Veracruz (México)

The tugboats hoist officially since the 6th of September the Mexican flag, after a simple ceremony celebrated in Guangzhou (China), that counted with the assistance of the General Consul of Mexico in China, representatives of the building shipyards, the tugboat crew and the captain Antonio Goicochea, as representative of Boluda Fos Corporación, receiving both units during the act of Patent of navigation from hands of the General Consul of The United Mexican States in the Republic of China.

The boats, who are twins, offers more than 5.000 b.h.p of power, are 32 m long, 11,6 m large and 5,81m of post and a Bollard Pull of 72 m. They also have a system of propulsion acimutal Schottel and two main engines Caterpillar 3516B of 2.682 CV each one, which allows them a speed of navigation of 12 knots. Also, they have a system against fires, fight against marine pollution and technical equipments that get the highest standards of quality.

The two tugboats will start the navigation the next days till their corresponding destination in the Mexican ports.

Boluda Towage and Salvage is leader in the sector of port tow, with a fleet of more than 200 tugboats, 130.00 annual services and a presence in 60 ports of Spain, France, West Africa, Indian Ocean and Latin America. 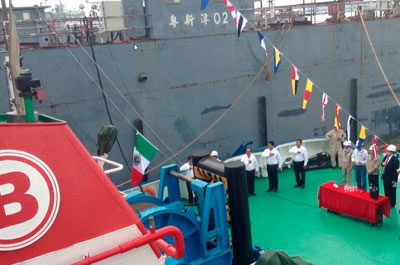