The Ferry broke the moorings, drifted and crashed into the dock of the port.

Tugs from Boluda Towage and Salvage France, had to act urgently yesterday due to the big storm suffered by the coast of Marseille which originated that the Ferry Napoleon Bonaparte, of 172 meters long and 30,4 meters large, because of a violent knock of wind, broke all its moorings and drifted to go to crash into the dock of the port of the French city, provoking a way of water.

The tugs of Boluda France were alerted urgently by the maritime competent authorities to go to rescue the Napoleón Bonaparte. The maneuvers executed in the middle of a big storm, allowed the stabilization of the boat and to maintain against the dock, till it was moored again.

As a precaution of the bad weather the fleet of tugs of Boluda France was maintained in alert from Saturday the 27th, and it was on Sunday, about 1h30 AM, due to the increase of the strength of the wind, when it has to intervene to avoid a disaster of big dimensions. Then thanks to the skill of the maneuvers of rescue executed, there were neither victims nor any kind of marine pollution.

Boluda Towage and Salvage has in Marseille a fleet of 11 tugs that make duties of assistance to maneuvers in the port, salvage and fight against pollution. 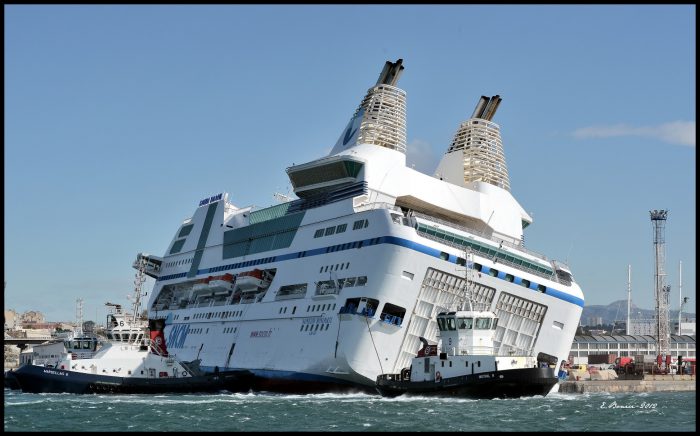