He faces his third mandate in front of the centenarian Association.

Vicente Boluda assured after the assembly that the Asociation Naviera Valenciana will continue to work because ”we want to combine the interests of the different companies we represent and consolidate the harmony that has always existed in the last years”.

He also said, regarding the goals of the new legislature that the Asociación Naviera Valenciana “has always defended the interests of the companies operating in the port, always collaborating with the Port and the Port authority, always in a clear spirit of collaboration.

In relation to the position of vice-president, position held by Francisco Lorente, Boluda told to be delighted with him and, in any case it is a question that has to see with the Asociación Naviera Valenciana.

He also said that he is optimistic facing the crisis and that  ”I don’t think we will last much in turning around the situation”.

One of the wishes of the Asociación and Vicente Boluda since he became president is the change of locals, and the President, respecting this question, has told “we have not resign at it. Till now it has been delayed because of the situation that the consortium goes through, but I think we will be able to go to those new locals”. 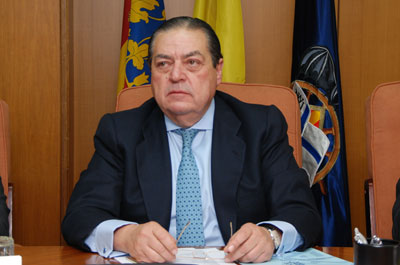