November 2, 2022. The president of Boluda Corporación Marítima, Vicente Boluda Fos, has been granted the Industria Azul Award 2022, in its 4th edition, awarded by the Maritime Cluster of Cantabria, and this will be presented in Santander on November 30.

“It has been a great honor to be awarded this prize and I think it’s the recognition of the efforts of our family, which has always considered that a port like Santander needed a Container Terminal to grow and complement its port traffic, which will allow the integration of Cantabria into the international arena”, said Vicente Boluda Fos.

The president of the Maritime Cluster of Cantabria, Juan Luis Sánchez, said that this award was proposed by the members of this entity and the Jury chose Vicente Boluda Fos “for his commitment to Cantabria”. In fact, this year Boluda Shipping is building the Container Terminal at the port of Santander, which will be renamed Boluda Maritime Terminals Santander, with an investment of 20 million euros.

“Vicente Boluda Fos”, said Juan Luis Sánchez, “is a leader in the Spanish maritime sector, who has been internationally awarded, and his investment in Santander is of great importance for the maritime sector of our Community for the employment it will generate, for bringing new traffic to the port and for the importance it will have indirectly on logistics and distribution in Cantabria”.

Terminals Santander will start at the beginning of 2023.Currently, Boluda Shipping, the division of Boluda Corporación Marítima dedicated to the international transport of goods and logistics, through its subsidiary Boluda Maritime Terminals, manages in Spain this type of infrastructure for the movement of containers in the ports of Las Palmas, Tenerife, La Palma, Fuerteventura, Villagarcía, Sevilla and Cádiz, and in 2023, the port of Santander will be joined by the port of Arrecife. 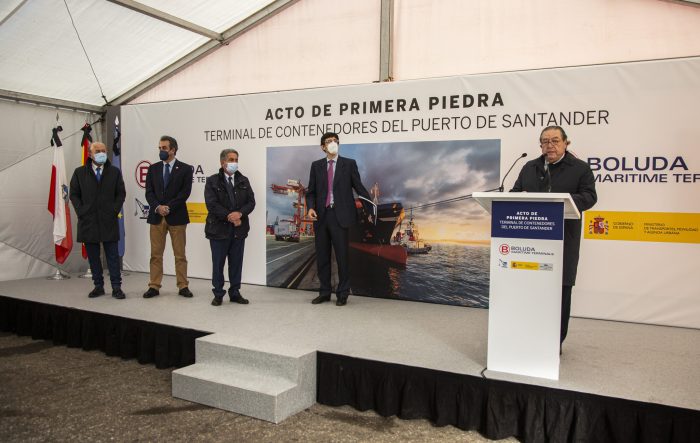 The president of Boluda Corporación Marítima, Vicente Boluda Fos, at the ceremony of laying the first stone of the container terminal in the port of Santander, which was held last February.