Boluda Maritime Corporation joins the “All for La Palma” campaign with a contribution of 17,552 euros

Boluda Maritime Corporation has joined the campaign “All for La Palma”, launched by the Port Authority of Santa Cruz de Tenerife and supported by State Ports, by contributing to the fund an amount of 17,552 euros, which will be delivered to those affected by the eruption of the Cumbre Vieja volcano.

This amount corresponds to 50% of the cost of the sponsorship by Boluda Maritime Corporation of the traditional Christmas Concert that the Ports of Tenerife has been organizing 27 times with the sponsorship of the shipping company.

The “All for La Palma” initiative is part of a larger action plan that also includes everything from volunteer activities to the provision, as early as 2022, of economic aid to promote the regeneration of La Palma.

The symbolic delivery of the check for 17,552 euros took place yesterday in the Board Building of the Port, in a ceremony attended by the president of Ports of Tenerife, Carlos González, and Joaquín Quiles, assistant to the president of Boluda Maritime Corporation.

Carlos González expressed his gratitude for this contribution to the fund, which is another sign of the commitment of this important maritime corporation with La Palma, especially in these difficult times. González wanted to emphasize that the port and its operators are also important members of the society of La Palma, giving thanks for the support shown by the Port Community.

Joaquín Quiles stressed the total willingness of Boluda Maritime Corporation to provide all the necessary collaboration to La Palma. In fact, the Boluda Shipping division has promoted actions such as making available to banana companies the use of refrigerated containers (reefers) to store bananas from farms with the “Plátano de Canarias” denomination of origin, affected by the lava flow.

Boluda Maritime Corporation has also contributed to the mobilization of goods and resources and, if necessary, to the evacuation of the inhabitants of the municipalities affected by the volcano eruption.

Logistical support has also been provided through the implementation of the Company’s own mechanism, called “Humanitarian Transport”, through which more than ten containers of support material from different parts of Spain have been sent to the island from the port of Cadiz. In addition, six Boluda Lines containers have been offered to the agricultural and livestock sector for logistics, and the ship ANAMARIE has collaborated with the transfer to Puerto Naos of two portable desalination plants from the ports of Las Palmas and Santa Cruz de Tenerife.

Through its divisions Boluda Towage and Boluda Shipping, it has a fleet of 16 tugboats, 14 container ships and four maritime terminals in the Canary Islands, one of them in the port of Santa Cruz de La Palma and the other in Santa Cruz de Tenerife. 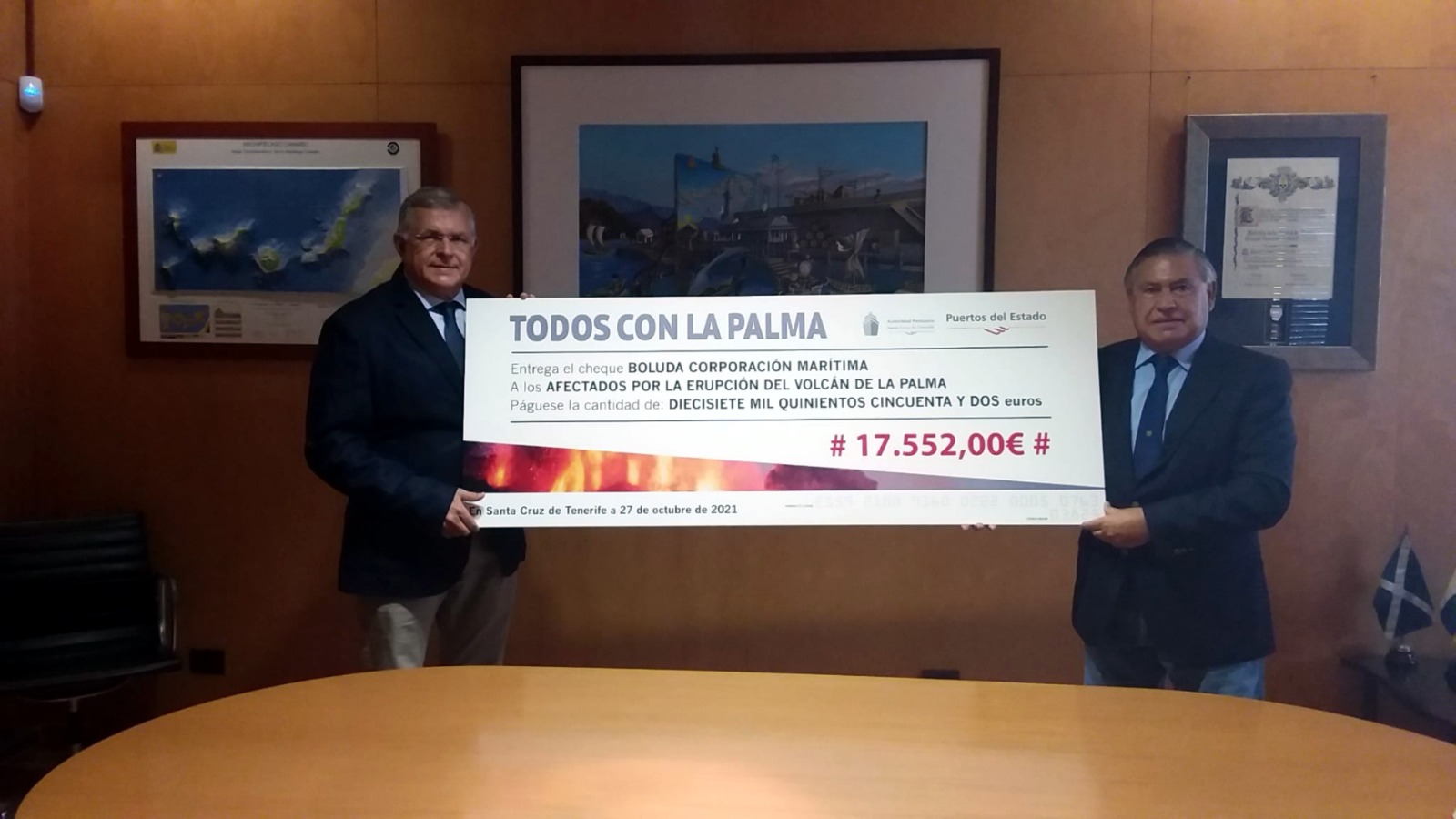 Ceremony of the contribution to the campaign ‘All for La Palma’.