The meeting took part in the offices of Las Palmas where they show their gratitude for the launch of the museum of the sea.

Las palmas. The XX executive committee of the regional section canaries- Africa of the international association for the coordination of the manipulation of charge, ICHCA, has visited the offices of boluda corporacion martima of Las Palmas de Gran Canaria, where they were welcome by Joaquin Quiles, deputy chairman.

During the meeting they were informed of the activities and the international presence that have Boluda Corporación maritima, as well as about the collaboration that, as patron of the foundation Port of Las Palmas, help permanently in the training of peoples in distinct African ports.

This meeting has allowed Mama Lamare,  responsible of studies and international projects of the council of stevedore of Cameroun, express publicly his agreement to Vicente Boluda for his collaboration in the launch of the museum of the Sea.

The general assembly of ICHCA will take part this year in Abidjan ( Ivory coast) next autumn. 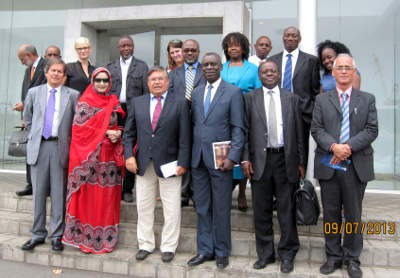