The embarcations who operate in the north, south and Spanish Levante, will be delivered at the end of the year to Sasemar.

Boluda corporacion maritima has celebrated this afternoon the launch  of Sar Mesana, the third tugboat built for the Sociedad Estatal de Salvamente Maritimo ( Sasemar) and who complete a serie of three embarcations ordered to the division of Boluda Shipyards, dedicate to the naval construction and repair. As well as the two others The Sar Mastelero and the Sar Gavia, the Sar Mesana, will be delivered at the end of the year to the society depending of the Minister of Foment, completing this way the renovation of its fleet.

The SAr Mesana shares technical carateristics with its twin vessels and has been produced using the most innovating systems of communications and navigation. Between its technical caracteristics it stands out the length of 39.70 metres, the large of 12,50 metres and the prop of 5,8 metres. It’s draft has 4,20 metres, reach a speed of 13 knots and a pull in fixed point of 60 tons. The propelling plant is composed by two diesel engines ABC of 8 cylinder in line and, also, dispose of a propeller of prow Schotell who gives it an excellent maneuverability. Being a boat specialized in maritime salvage, it has an area of rescue and a space specific to shipwreck survivors. It also realise work of attention to boats with problems and fight against fires. It’s capacity is of 9 sailors.

The launch of the Sar Mesana, has been presented by Vicente Boluda Chairman of Boluda Corporacion Maritima who has pointed out the long trajectory of his company as a leading company in the port towage as a competitive advantage in the moment of building tugboats. Also the technical innovations and the modernization of Boluda Shipyards, together with its specialization in the construction of tugboats, salvage, bunkers and assistant boats has converted them in reference in the sector

Together to the president of the corporation has been Jose luis Cachafeiro, general secretary of Transport of Ministery of Fomento, who has acted as patron of the launch. The ministry of Fomento has invested a total of 37,8 millions of euros in the 3 boats and once they start to work, Salvamento Maritimo will have 14 embarcations of its own and one boat recogedor chartered 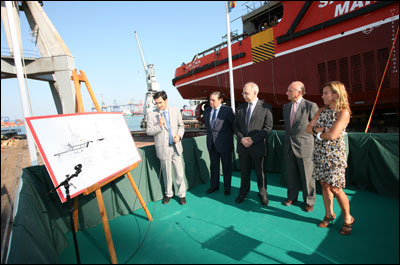